EVANGELISM IN THE CARIBBEAN : MISSION IN GUADELOUPE


Evangelization in the Caribbean - 2015

We went to the West Indies from June 17 to July 7, at the invitation of Pastor Dominique Dick an Evangelist of Guadeloupe for an evangelical campaign he organized with some Churches of Guadeloupe. Originally we also had to ensure a seminar in order to prepare the participants to the 2016 International Bible Camp in Cameroon in July-August, which was to bring together participants from Martinique and Guadeloupe. The seminar was to be held in Guadeloupe after the campaign and then I had to travel to Martinique to ensure the same seminar with the people of Martinique until July 5th and come back to Guadeloupe and get my flight on the 6th to France.

Pastor Emmanuel Koum, an Evangelist from Cameroon, constant companion of mine in the mission field, joined me this time. The theme chosen by the organizers was “Face with a Hopeless World where to find Hope.” A seminar on spiritual warfare was scheduled every morning of the four first days of evangelization and the conferences were held every evening. Alongside the campaign, we respectively preached in many Churches of the Island. 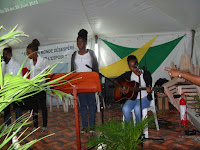 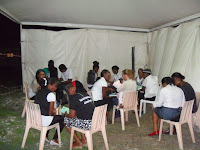 in the municipality of Port-Louis, were a large tent was settled, similar to a meeting tent like the one the Israelites rose in the desert after their exodus from Egypt. There was also a less big one that served for food, another one for the bookstore and three smaller ones, two for the storage of chairs, and one for interviews with new converts. The Conference began on Sunday, June 21st and ended the following Sunday, June 28th 2015. The launch was made a day before on Saturday 20th by Pastor Dominique Dick during an evening of praise and intercession which was a great “God’s feast Day” during which he introduced the theme of the week of evangelization. Then the speakers during the following days were successively Pastors Emmanuel Koum, Dominique Dick, Daniel Mpondo and Maurice Sitcharn. The evening meetings were chaired alternatively by leaders of the participating Churches, respectively of Port-Louis, Bay-Mahault, Bethel, Grand Camp, Mission Chrétienne (Christian Mission), Basse-Terre, Le Moule and praise was led by these churches’ bands. Many souls came to the Lord Jesus. The Lord be glorified! 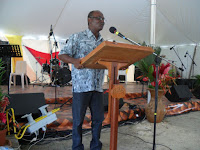 They were held in the same place from 9am to noon, from June 23rd to 26th. For these teachings, the attendance was less than during the evening meetings, mostly church leaders and some very committed Christians. The lectures focused on “Demonology” by Pastor Dominique Dick, “The Spiritual warfare” by Pastor Daniel Mpondo, “Walk by the Spirit” by Pastor Harry Montresor and “To Follow Jesus” by Pastor Emmanuel Koum. This seminar was of great edification for all the participants including speakers themselves.

The visits to Churches 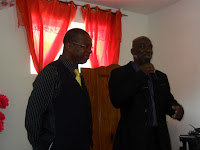 Alongside the Conferences and after, Pastor Emmanuel Koum and I have been sent to various Churches of Guadeloupe where we also shared the word on Sundays during the services. Then the program with Martinique having been cancelled, the Lord led another program to take place in Guadeloupe with some Churches where I also shared the message on Sunday services and ministered during some evening meetings. We once again saw the Lord at Work. To Him be all the glory!

We also had two meetings alongside the Conferences, contrary to what was expected. These meetings brought together some young people first, then many people joined us, young and old eager to make the trip to Cameroon in July and August 2016. The Rev. Emmanuel Koum and I have trained them on preparing the trip on the motivations that must animate those who wish to undertake this journey. It was about administrative procedures, information on the welcoming principles, accommodation, health care and all the cultural aspects (what to be or not to be making, behaviour and outfits -how to dress- in evangelical circles in Africa…) we met a lot of adherences to the project which hopefully will turn into firm registrations.

Throughout this mission we have seen the Lord at work and we hope that it will continue after our passage with as much force and fervour. It was also a great spiritual battle in all domains. What happened to Pastor Emmanuel Koum on his return to France when he arrived Orly Airport is a demonstration. Indeed, there was another program awaiting him in Paris and he left therefore the West Indies before me. But once he arrived the Airport, while he had a visa that allowed him to stay 11 more days, he was refused the entrance in the French territory. The reason was the Schengen visa did not allow him to travel to the Caribbean therefore he was in breach and was to be deported to Cameroon, which was done the following day under police escort. We all wondered why the border police did not point out to him on his departure for Guadeloupe or even when he was embarking at Point-a-Pitre Airport… For this also may the Lord be glorified! 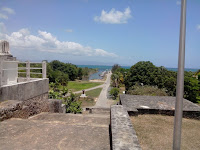 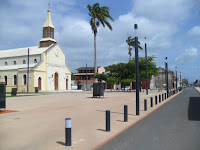