After the healing process among team members, we were ready to undertake the marches.

The first march took place in Montego Bay. It was emotional for some of us, about the third, who were experiencing this for the first time. Each March was punctuated by a specific historical event of the place we were marching in. This event had a close relationship with a tragic situation experienced by the slaves, the struggle for the emancipation of slavery or freedom from the oppression of the people after abolition. We left the docks next to a field where we were told that hundred of slaves had been buried there after some ships had arrived with survivors.

At the head of the procession was an Afro-Colombian young man, Yeison, holding a stick in his hand at the end of which was hung a serpent. This has resulted in some jeers from some passers who accused us of occultism, the serpent being for a lot the symbol of the devil. David was later to explain the relationship with our approach: this is the symbol of healing used by medical professionals and comes from the story of Moses, who had raised a brazen serpent in the desert so that when the children of Israel were bitten by the serpents of fire, they would not die when watching the serpent of brass and they are healed. Nevertheless laughter and mockery punctuated our walk. But also some people showed curious and sometimes sympathetic.


We then made a stop at Sam Sharpe Square, one of the heroes of the country, before we end the march at the Burchell Baptist Church. Sam Sharpe was an educated city slave, preacher and deacon the native Baptist Church of Montego Bay. He is at the origin of the slave revolt of 1831. He began a passive resistance claiming that slaves should not work on Christmas day. This led to a rebellion after which he was arrested and hanged December 27 1832. His action was the cause of abolition bill passed by the British Parliament in 1834 followed by the proclamation in 1838 of the abolition of slavery in British colonies.

When we arrived at the Baptist Church, we addressed to the small number of parishioners and some onlookers who followed the procession. In turn we gave our apologies to this group, the English whom had to read a statement of apology from a representative of Spain who could not make the trip, a Scotsman, a Frenchman and two Africans. It was a memorable moment, full of emotions especially when Jamaicans came to liberate the Europeans from their chains and their yokes
Publié par Daniel MPONDO à 01:57 Aucun commentaire:

Jamaica 2012 with the Lifeline Expedition

The mission of Lifeline Expedition has just ended. It has allowed us to realize that the issue of the consequences of slavery and colonization of black people today is still painful and requires a delicate communication about events that took place in Africa and the Americas. A newspaper columnist “The Jamaica Observer” began his paper with these words: “The inconvenient truth of the evils of the African slave trade will not go away; no more than the horrors of the Jewish holocaust will. Maybe one day, like the Jews, we will cast off the vestiges of slavery and rise confident in our identity as a great and noble race.” This shows how black people need to heal this “legacy”. But as this is a common heritage with the West, it can not be done outside of them. To me this implies that two or three parts together make this trip back in history to heal together and seal the reconciliation between the peoples affected by this painful history.

As Christians we believe that reconciliation will necessitate the recognition of injury to this people by the descendents of those who bear the responsibility, first in the West and to some extent Africans who sold their brothers to the West, often by greed. This reconciliation necessitates then a request for forgiveness. That’s why representatives of the nations involved in this human drama symbolically made yokes and chains for a prophetic walk across the country. 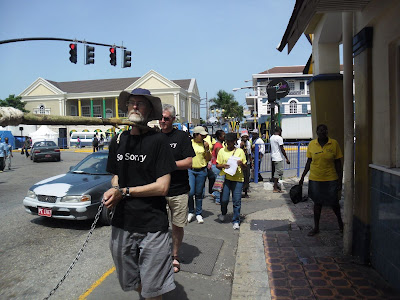 These marches, under the leadership of the Christian movement of reconciliation “Lifeline Expedition”, were to tell the Jamaican people that we, African and European descendants of those who were at the origin of this drama of humanity, regret and ask for forgiveness. Only the Europeans were shackled and wore yokes. This meant: “we understand what your ancestors have endured because of us and ask forgiveness.” The Marches were done in silence and in prayers and proclamations. Our steps were occasionally punctuated by the beat of an African tam-tam, which gave a certain solemnity in the procession, and which led our brothers and sisters in the Diaspora to say later during the last debriefing that its reasoning will always reason in their ears as a reminder to their African origins. They ended in a public place by a statement of each of the representative of Europe in chains and yoke followed by a statement of one of the representative of Africa. This was to recognize the involvement of the ancestors of the countries represented in this despicable trade and its consequences. It ended with a plea for forgiveness. Then ensued discussions some of which sometimes very vivid, often poignant, but each time the pardon was granted and the visited peoples symbolically delivered European from their chains and their yokes.

The first meetings were devoted to team building. Given the psychological and spiritual stress implied by the marches, it was essential that the team is united and in solidarity. It was necessary that all team members are aware of the motivations and objectives of these marches. For that reason it was important to know each other and the best way was to introduce expressing one’s motivations, one’s process of involvement in this reconciliation project. It was for me the decisive part in my commitment to the reconciliation of people involved in the triangular trade. Our team mates, descendants of slaves moved me so much that I could do nothing else but totally embody with that “battle” for reconciliation. I discovered the suffering that inhabited my people and which I had only intellectually understood by my commitment to the struggle fro reconciliation up to now. I discovered things I did not know yet, despite all the books I had read about this crime against humanity, and I was overturned to the bottom of my gut. A sister, in particular, overturned me because of her revolt against that situation. We cried together and prayed for each other. The healing process had begun among us, members of the team. I did not expect this at all, it was extraordinary, even divine! I understood that it was necessary that this work be done before we engage in these marches.


Prayer requests will mainly concern the consequences of the mission in Jamaica. Let’s pray:

1) That the prophetic marches on Jamaica have an impact on the country’s future.
2) For the healing of psychological, mental and spiritual slavery to be effective in the hearts of Jamaicans, in short, as stated by Bob Marley, that they are freed from the slave mentality.