The Maeva Source of Living Water created its Regional Delegation for West Africa (RDWA) and appointed its first Regional Delegate for West Africa in the person of Dr. Germain Eusebio KEBE-MAMBO, who as already in charge of Maeva Sev C-I medical Centers. The president of Maeva Sev France went in Ivory Coast from April 14 to 30, 2016 for a program that would lead him Bouaké, a city located to the north of the country, about an hour from Yamoussoukro, and that would also lead him to Dabou, in about fifty kilometres from Abidjan.

Originaly it was an evangelistic team that was to go, after the last evangeization ampaign two years earlier, in June 2014. But the churches of Bouake could not organize during the proposed period that was the only period the team was available? Therefore the mission was postponed for whole team but the President. He had to make an inventory of ongoing projects, including microfinance he had set up in 2014 and meet the beneficiaries of this project. He laso had to provide training to the Maeva Sev RDWA team on what our NGO expects from them. After the mission in Bouakke, the President had to travel to Dabou for an evangelistic program in the penitentiary center of the city. On this occasion, he had to give a humanitarian present for the prisoners and their families.

But the Maeva Sev President’s visit program was completely upset. The Methodist Chrch was organizing at that time a week training for preachers and Daniel Mpondo was invited to provide this training thoughout his stay in Bouaké. Alongside this program, he successively met women beneficiaries of the Maeva Sev microfinance funding and the leadership of the Maeva Sev RDWA. 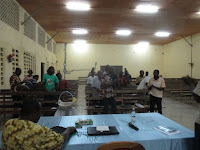 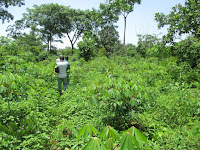 During our last mission in Bouaké in June 2014, we established a Microfinance to help people, especialy women who wanted to undertake but were not eligible for a bank loan. This meeting was one of the main reasons of this trip as we had seldom information regarding the management of this microfinance. The meeting with the women beneficiaries of the micro financing took place on Friday, April 22 in the office of Dr. Kebe-Mambo. But the RDWA took us the day before visiting the cassava field that the ladies had acquired to develop their project, they had about a hectar cultivated with high yield cuttings they acquired from the official Agricultural Development Agency. 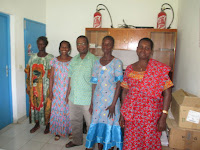 The next day we met the ladies who presented us with the management off their projet and we were pleasantly surprised by their work and prudent management of their project with reasonable growth and planned development based on their penetration in the local market of Atieke. Indeed it is a small production unit of atieke, basic Ivorians food whose raw material is cassava. They have regularly reimburse their loan and needed and extension of financing to acquire their own equipment in anticipation of their future harvest. They had worked for a year by buying the raw material before deciding the acquisition of a field to produce cassava themselves. The Maeva Sev agreed to this extension by advising them to prospect the market well before increasing their production. Dr. Kebe-Mambo pledged their support for their research to penetrate the market of the schools in the region, where a canteen is served.

The briefing and training of the Maeva Sev RDWA Team 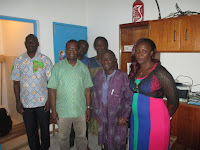 The meeting with the Maeva Sev Team that should have been the seond main reason for this mission that originaly consisted of two or three days of training the new team, finaly took place the day before departure of the president of Maeva Sev, on Saturday April 23. It was also held in the office of Dr. Kebe-Mambo. The latter made a Power Point presentation on the founding texts of the missionary organization and operation, based on the example of the Regional Delegation for Central Africa (RDCA) who welcomed the Maeva Sev France General Assembly in Cameroon. He stressed the autonomy of representations and Antennae that should secure themselves their functioning, as the example of Cameroon, the Maeva Sev France helping only for specific projects.

The Microfinance managers have not been able to present their management report of the unit, unlike the ladies of the “Atieke Production Unit”, it was therefore agreed that the report would be sent later in France.

The mission in Bouake, because of unexpected program proposed by the leaders of the United Methodist Chruch (UMC-EMU-) of the Gbeke Region (Bouaké) was very intense and ultimately rewarding for all. Unfortunately this was not the case for the continuation of the program for the second week in Dabou where an evagelization action was planned in prisons with dispensing humanitarian parcels for the prisonners and their families. Indeed, Evangelist Daniel Mpondo had to cancel his intervention in this City: the pastor responsible of this program having confused the budget for the mission with manna from heaven to help himsolve his personal problems, it was not possible starting any program with this gentleman. Then it was an opportunity for him to take some rest with his Ivorian family. 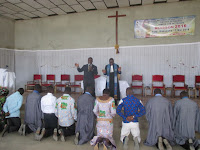 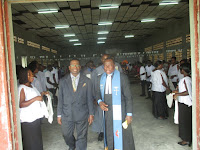