THE MANI TEAM MEETING IN NAIROBI 2015

The Movement for African National Initiatives (MANI) Steering Committee, following the postponement of the Africa Heads of Churches Summit, gathering Unions and Federations of African Churches, previously expected in Accra, Ghana, from 9 to 13 February 2015, met the same dates in Nairobi Kenya, to organize the upcoming event of this movement an review some principles of its operation. Our meetings as usual begin with prayer, praise and meditation daily, before starting discussing or reporting on the subjects of the agenda.

As Introduction we analysed the situation in Africa regarding everything she undergoes to this world. We cannot ignore the social and economic changes affecting the life of the Church in Africa: changing our original plan because of the Ebola disease is one of the illustrations; what happens in Central African Republic and around Lake Chad with the Islamic sect Boko Haram, the persecutions of Christians in the Horn of Africa and Sudan are others. More than ever, Africa is feeling the impact of everything that happens in the world. It is in this perspective that we met in Nairobi to discuss about how to attain our objectives: to reach unreached peoples of Africa by the Gospel. For all this we have to listen and depend on the Holy Spirit, especially for the challenges that await us in Africa. We need help in our continent, not that of a man, a State or government, but of the Holy Spirit. Whatever the challenge, this is what we need and the Holy Spirit will strengthen and encourage us.

Two key points were on the agenda; 1) the postponement of the Accra Summit 2) the organization of the Consultation of our Movement in Addis Ababa in March 2016. But we also analysed the problems encountered in each MANI region after a report from every concerned leader. We also considered a policy or a plan to mentor regional leader’s successors.

The postponement of the Accra Summit:

The Very Rev. Dr Yaw Frimpong, coordinator for the Accra meeting, began by thanking all those who contributed to this organization despite its postponement. The Ebola issue did not only scare Africa but also the whole world. The epidemic is about to be controlled and Rev. Dr Yaw thinks we can maintain the Summit in the same venue. But a discussion took place between those who think we should move to Addis Ababa and hold the meeting shortly before the MANI 2016 Consultation and those who think it is wise to keep the meeting in Accra. Another suggestion was to swap the two; it was quickly eliminated because they are organizational and individual commitments that would have generated more problems instead of making it easy. We finally adopted to maintain the Summit in Accra, given the commitment of the local churches for this project and the existence of an organizing committee who did a remarkable job and reminded us that the meeting was not cancelled but postponed; besides, a budget was ready and the funds had already begun to be raised, it would be a waste to deprive us of this already available expertise. Therefore the Summit will take place from 8 to 12 February 2016 in Accra, Ghana.

After that, we reviewed the progress of the preparatory work for the organization of the Addis Ababa Consultation. Proposals concerning the various possibilities were submitted by the MANI Horn of Africa Coordinator as thumbnails. Ultimately we adopted the proposal of holding the opening and closing sessions in the premises of the African Union (AU) and the working sessions in those of the EIT/ETC. We have reviewed the participation quotas by region. Only 10 participants were retained for the Diaspora Region, at my request we obtained 8 more bringing it to 18 delegates.

Each of the Region coordinators or MANI representatives made his report in which he exposed the actions, the challenges or difficulties encountered and future prospects.

The succession plan for the leadership of the movement

The question was raised as to what direction takes the MANI at this precise moment of its existence. Should we shift into an organization or strive to remain a movement? Our movement has reached a level which we cannot continually operate as we currently do. In this, Brother Reuben, Continental Coordinator said that we are not an organization like the Lausanne Movement or like the COMIBAN, our counterpart in Latin America, which have structures. God is faithful, if we put our trust in Him He is!

The MANI is a movement based on a vision. We got to a point where we must certainly take it to another level. Reuben was designated as successor to Ross because he was the one most to carry the same vision and bring the movement to another level. He said in order to prepare his succession he needed to mentor one to three people during two to three years. For it is not a matter of a succession to the same thing as he does, but a continuation to bring the movement to a higher level. Moreover we should not forget we are catalysts, not competitors. We must be careful not to put ourselves in competition with those in the field.

The MANI is not just a Continental Coordinator, but a team with regional coordinators and local partners as well as foreign ones, such as Emerging Leaders, Strategic Prayer, Church Planting, CAP, Missions to Muslim with especially “Vision 5:9” etc. working in their own areas and networks and contributing simultaneously to expand the MANI network. We must be aware that the time has come for new leadership and pray that the Lord will establish one according to His project. The environment has hanged. Our continent is characterized by a rise in fundamentalism and especially Islamic fundamentalism as the world has never known. Listening to God and covering all with our prayers, we need someone who will bring MANI to where God wants to take us.

We will return to our respective countries and nations. Then we have to examine where we are with our vision, becaus after all, it is all about what is happening in Africa: let's identify our resources, what remains to be done and human resources ready to accomplish the task. Once done, we must be able to present to the Church and say "this is what happens..." May God help us! 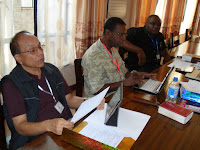 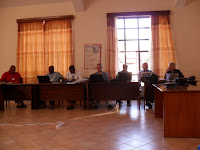