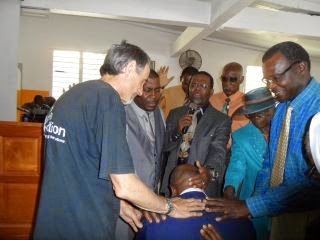 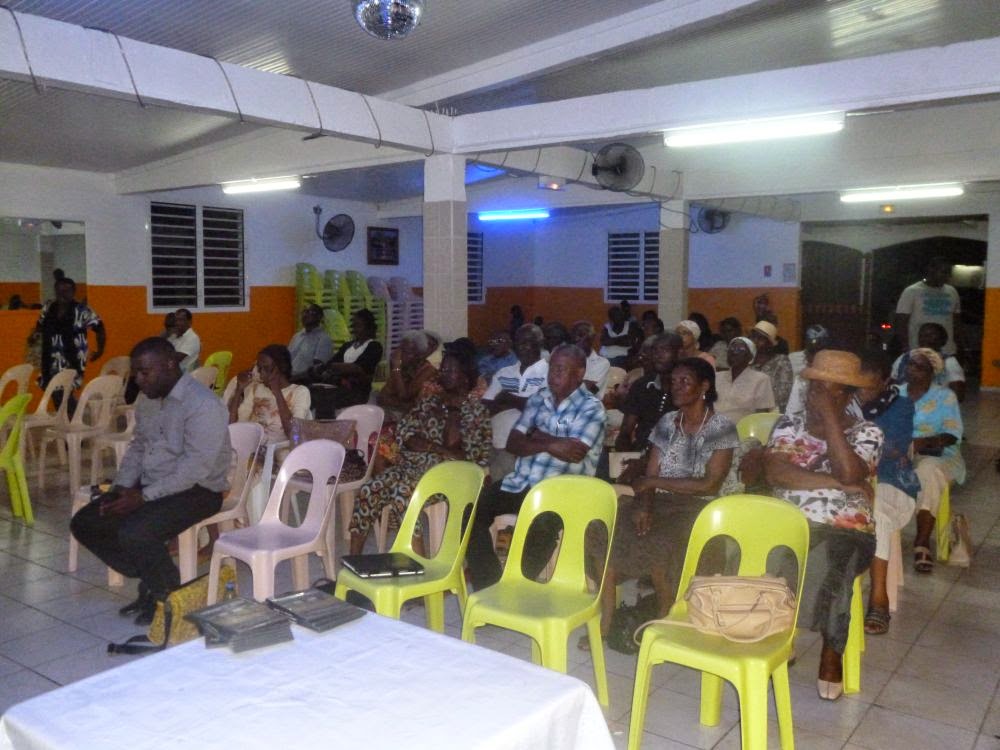 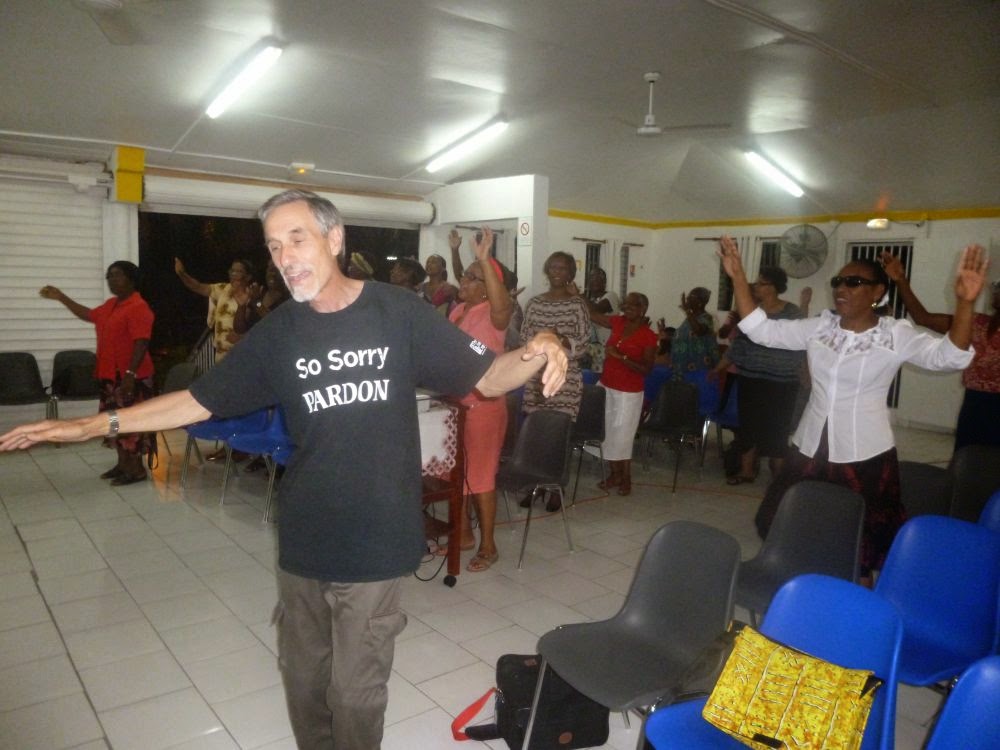 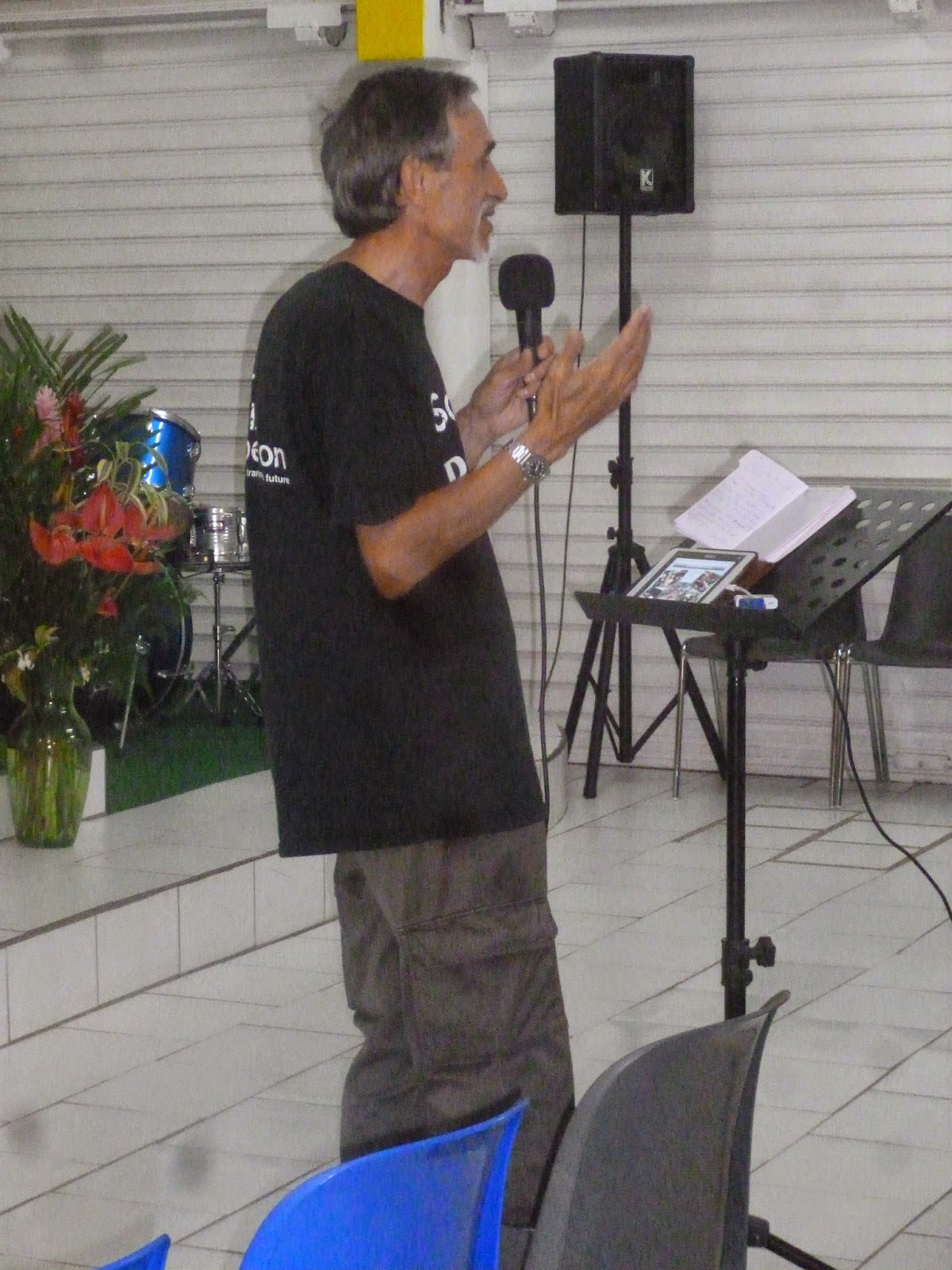 MISSION TO THE FRENCH WEST INDIES 1 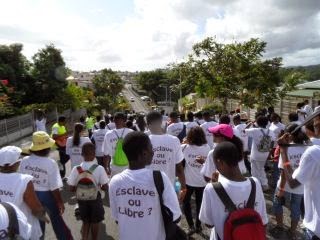 In the framework of the commemoration of the abolition of slavery in Martinique in May 22 and May 26 in Guadeloupe, we went to the French West Indies Jacques VIGOUROUX and me, from May 14th to June 2nd 2014. We already had undertaken a similar mission with Lifeline Expedition last year. The Mission Maeva Source of Living Water often joins this Christian for movement reconciliation of the peoples affected by slavery of black Africans through the triangle trade.

MARTINIQUE May 14-24 and May 29th to June 2nd
This year, we had to travel to Martinique earlier than usual, which led me to cancel some of my commitments in May. Also, I was barely out of an attack of acute bronchitis, I was still very low, in treatment and physically diminished. This is probably why I caught chikungunya during our stay. We arrive in Martinique on May 14th in the afternoon. Our team was on site at the airport to greet us. We were staying with a host by Pastor Jannik DUNOT who invited us to the program put in place for the celebration of the abolition. It is the Lifeline Team that took care of our stewardship and most of the logistics for the entire stay. Fred had place at our disposal by taking leave for the period. It was he who led us to our appointments. Ginette who is heading Lifeline Expedition in Martinique teamed most of the time with us for interventions. A stewardship team with Julienne, Félide and Urbain her husband took care of us beautifully. Our work consisted, in churches on the one hand, to introduce Lifeline Expedition, 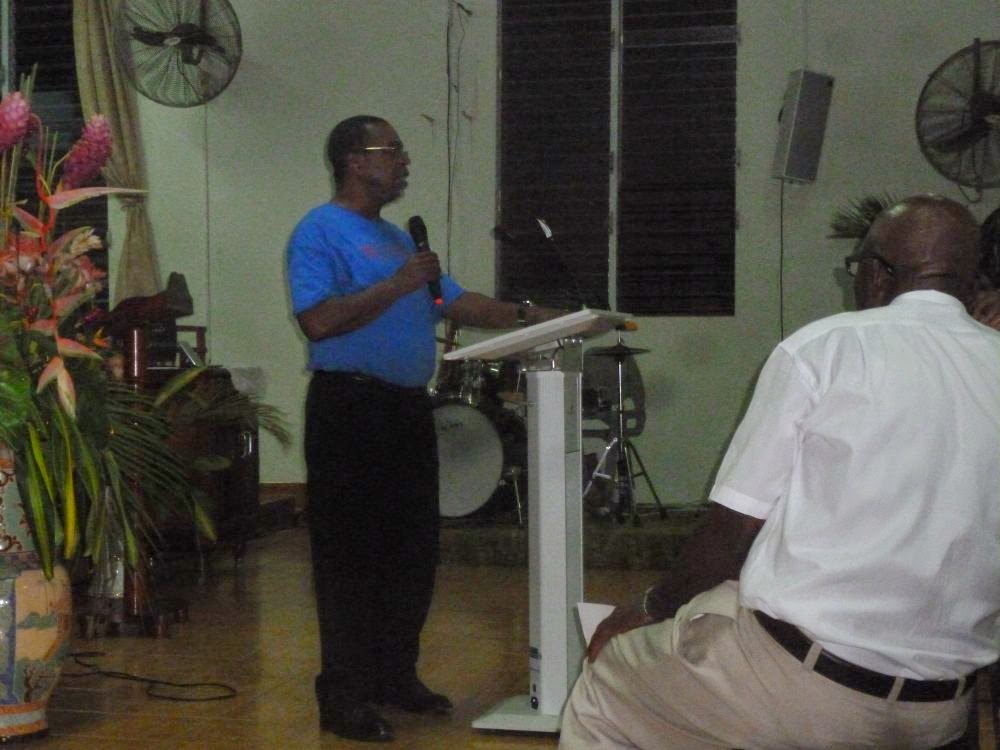 its objectives, experiences in countries already visited and mode of action: marches in chains and yokes. This part was handled with expertise by Jacques VIGOUROUX who participated in most of these missions. On the other hand to deliver a message in the form of conference with Daniel MPONDO that was followed by a debate that was conducted by the three parts of the Lifeline’s team, Jacques Vigouroux for Europe, Daniel Mpondo for Africa and Ginette Alcindor for African slaves descendants. The theme this year was “Slavery and Freedom” based on the example of the liberation of the Hebrews from slavery in Egypt, in Exodus chapter 12. 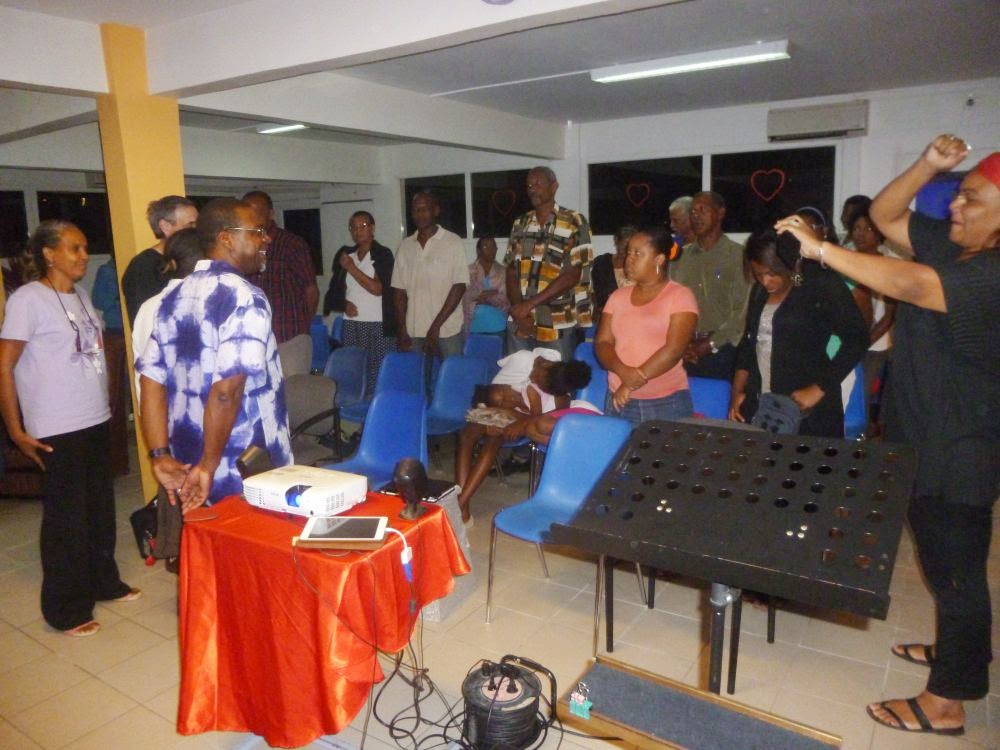 Our first action was a conference with the Servant of God Liliane TELAMONT on the evening of May 16th. I was just out of a crisis of asthmatic bronchitis and was not well that night. But after Sister Lillian gave me a concoction of herbs, the team prayed for me and I recovered and the evening proceeded with satisfaction for the glory of the Lord. We then hosted similar conferences  in may churches including Pastor Fracius COX’s for preaching during the Sunday service May 18th, Pastor RODRIGUE’s, Pastor GOUDET’s and so on. We had to shorten our stay in Guadeloupe in order to be able to deliver our message to the Church of TSF.

The day after our intervention at Sister Lillian’s place, on Saturday May 17th, we had a day free and we 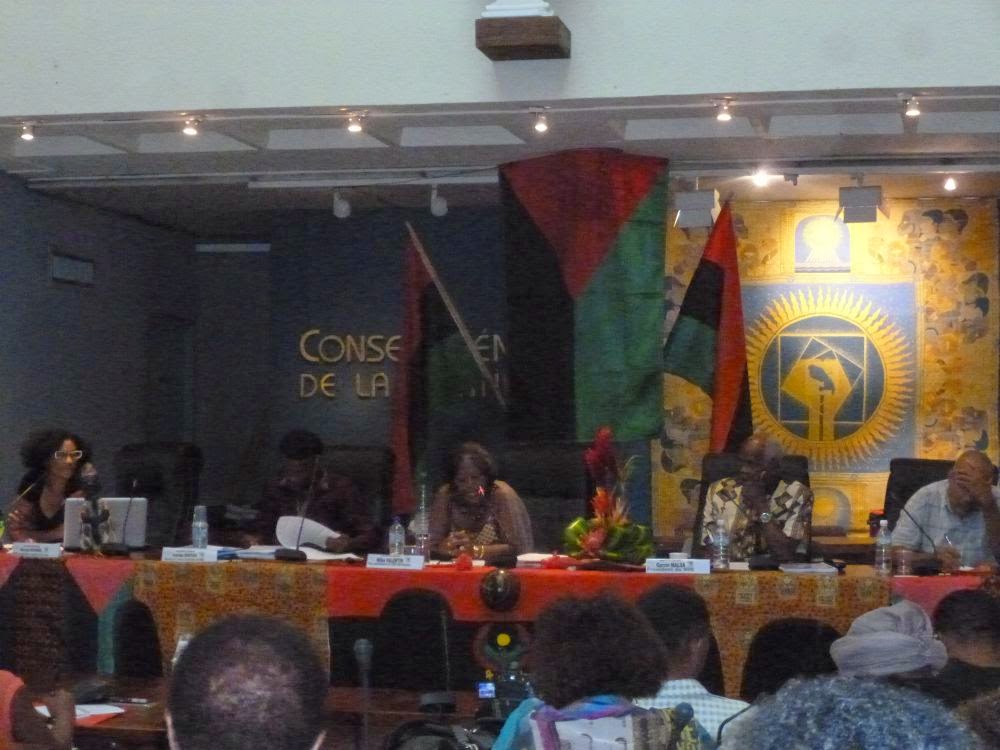 took opportunity to respond positively to invitation which was made to attend the symposium on “Alienation and Repair” that was hosted all day at the premises of the Regional Council of Martinique. The discussions were very interesting and we have found a change in mentality among our Brothers and Sisters descendants of African slaves, a desire to deal with this issue, courageous awareness of the necessary emancipation from paradigms that have long based their behaviour on anger, hatred of all that was at the origine of this issue and a poor self-esteem, for a recontrction based on new paradigms. The intervention of the lawyer and philosopher Juliette SMERALDA was remarkable in that way. 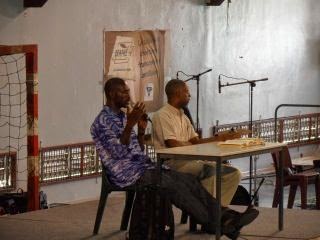 Two highlights were planed for this mission: Two televised round table with Graphé TV and a special day organized on May 22nd by Pastor Jannik DUNOT on the occasion of the celebration of the abolition of slavery, events at the roots of our mission in Martinique.On Wednesday, May 21st, we met at the premises of the church “Christian Evangelical Mission” of Pastor Dunot at DUCOS, for the round table organized by the Christian television channel “Graphé TV” on the theme “the Christian West Indies face the legacy of slavery: strength or weakness?” The debate was moderated by the Graphé TV journalist Marilyn LOUIS-JOSEPH with a few guests including my friend, Pastor Jean-Elie Moulin and I. The second round table on “West Indian woman today: released from the slave past?” that was planned could not take place due to lack of female presence in the debate. This debate is available from this channel.

On Thursday 22nd, the day of commemoration of the abolition, we took part in the Grand Scheme of the 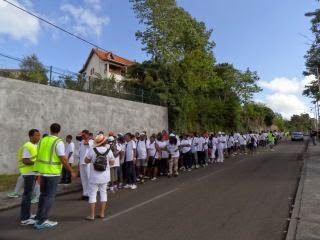 “Freedom March”. We started in the morning with a rally at the DUCOS Sports Centre that gathered hundreds people among them a majority of young people. Then we wore T-shirts with the question “Slave or free” print on them. We then parade from 8:20 am on a path defined in the town of Ducos, March that ended at 9:15 am in the same arena. We took then a traditional breakfast and followed two conferences, at 10:40pm with Steve GADET, teacher en researcher / author, and at 11:30am with the philosopher, theologian and author Max BELAISE, both committed Christians and university teachers in the university of “Antilles Guyana”. These lectures were followed with a debate moderated by Pastor J. Dunot. Then I was 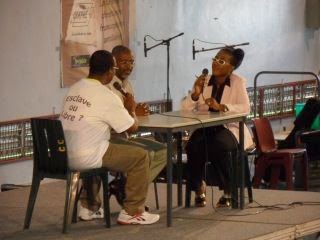 invited to an interview with Marilyn around 12:45. Between two and  and befor eating, the worship team hosted with gospel songs which I participated with the song “Brake Every Chains” I sang in English accompanied by the worship band that had sang it in French just before. Around 1pm we observed a lunch brake of about an hour. The afternoon was punctuated by a round table hosted by Lifeline Expedition and moderated by Graphé TV, worship and praise songs, skits and mimes presented by youth from different churches on the theme of slavery and freedom. It was a memorable day that ended with a final biblical reflection by J. Dunot, some more songs and a closing prayer before we disperse at 6pm. 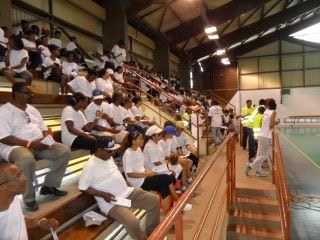 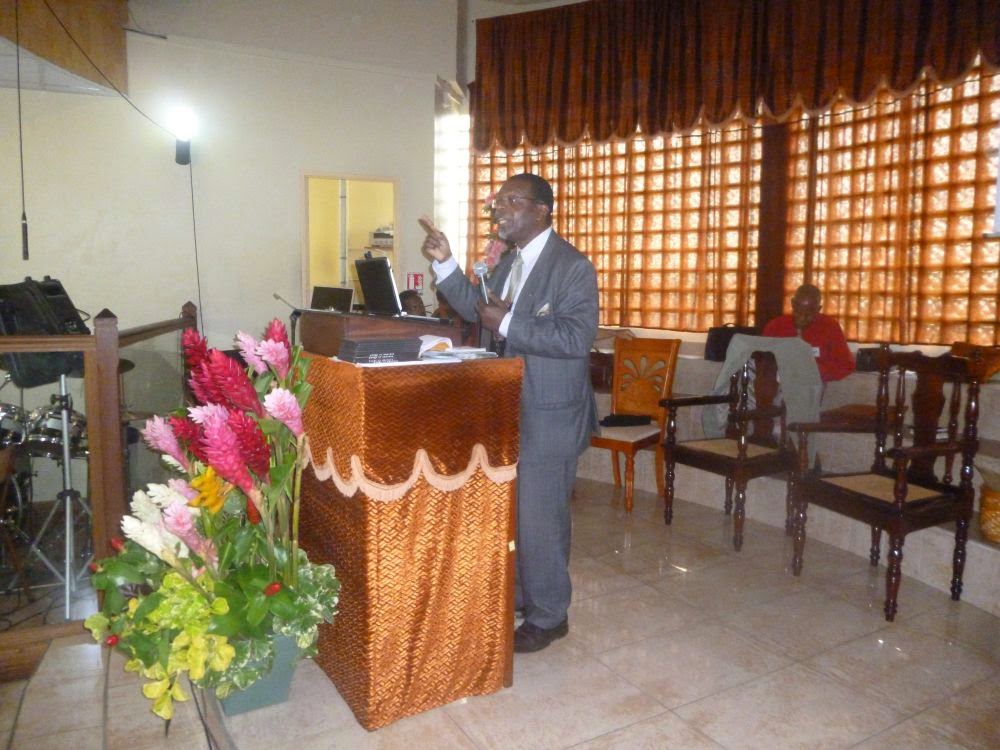 On our return from Guadeloupe we gave an additional conference on the same theme at the Full Gospel Evangelical Church of TSF. We responded to many other invitations and ended our stay with the Sunday Service in the Church of Pastor ZAILLIR were, after a brief presentation of our reconciliation movement by Jacques, I preached on the subject of Slavery and Freedom with the example of the Hebrew People freed from slavery in Egypt.

After that, we returned to France that evening and the Martinique lifeline team except Ginette who had gone to France during our stay in Guadeloupe, was there to see the French team off.
Publié par Daniel MPONDO à 10:21 Aucun commentaire: