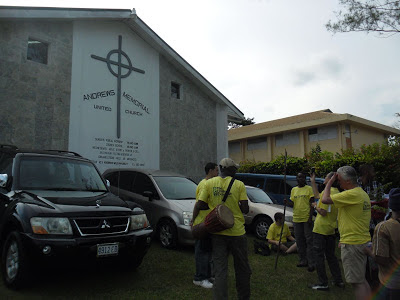 Welcome to our blog at the beginning of 2013. After a two-month stay in Africa where I have been blessed, with a very small team, to spread the fragrance of Christ, especially among Muslims in northern Cameroon, it pleases me to reconnect with you through this interview on the issue of reconciliation of peoples linked in by slave trade. I continually encounter people who either are at heart the vision, or have themselves also received. But until its completion, and I still believe it will be a culmination of all the visions that go in the same direction, it is with Lifeline Expedition that I experience the reality of my commitment to reconciliation. I like the slogan of this movement that speaks to me and truly affects me: “Healing the past… to transform the future”

Every time that as an African, I meet and speak with a brother or a sister descendant of slaves, I realize how necessary it is to undertake these actions.

A new walk in chains and yokes is scheduled in November this year in Haiti. In the mean time we will continue to talk about following our marches in Jamaica.

At Mandeville we had a precious time with the family Girgis, Jeanetta, Magdy and Jay who received us warmly and we were pleasantly restored. We needed this haven of peace and restoration before continuing our mission. Many thanks Jeanetta.
Then we had a time of sharing and prayer to prepare our next actions: two cults, one at Ridgemount Church and the other at Generations Church. After the march in the afternoon, we went to Andrews Memorial United Church where we presented our apology in chains and yokes to a congregation that was celebrating the Emancipation Day, a high profile civic event attended by more than 400 people. It was very moving to hear apology from Jeanetta as Jamaican descendant of white settlers and Chris McCrossan representing Scotland whose involvement in the island was huge. This can be seen when consulting the telephone directory: over 60% of Jamaican has Scottish names. 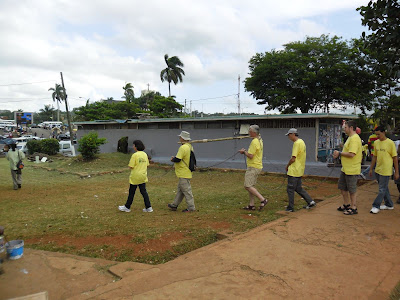 Walking in the city center was something different compared to what we had done sp far. First, the fact that there were among those walking in chains a woman, white and Jamaican descent, then that we started to meet the Jamaicans around us and explain what we were doing and why, going to see them in shops, offices that were opened that Sunday afternoon, and even a Church posit our starting point. Besides, throughout the course, some of us met the population by distributing leaflets to passers and discussing with them. Moreover, Joseph, before the procession did shake, talked for a good half hour with a Rasta who was initially hostile, and then towards the end he became more friendly and blessed our march.

When we reached the main square in the center of Mandeville, we made our apology. There were various and genuine reactions. But a group walked in a palpable emotion and released the chained and yoked people. Afterwards, we went to the Andrews Memorial United Church for a special service.

Thank you to pray:
- For the future actions, including our next mission in Haiti in November 2013. Pray that more people who share our vision of reconciliation join the movement.
- For patience to fill our hearts and that our confidence is not shaken
- That the Lord God renews our strength and that His will be the focus of our actions.