Like every year, we have a program of evangelization in Cameroon. It was originally planned in three stages: the first from 19 to 27 November among the Central Africa Republic (CAR) refugees in Garoua Boulay, the second from December 9 to 20 in Bertoua, in eastern Cameroon and we had to finish with Douala from 21 to 24 December. A death in the family did not allow me to take part in the Campaign of Garoua Boulay which took place simultaneously with the funeral in my family and causes beyond our control led Pastor Emmanuel Koum to cancel our mission in this region. Ultimately, the campaign took place in Douala from Sunday 20 to Wednesday December 23.

For four days, we pitched our tents at the Makepe Roundabout of where we were in turn speakers, Pastor Emmanuel Koum and myself. This place is a strategic location at te crossroads from Douala centre and Bepanda towars Bonamoussadi an Logpom, as well as to the General Hospital. It is also located in the middle of buildings overlooking the square and from which we have found, according to numerous testimonies we had later, that the inhabitants could distinctly follow the preaching. An advertisement was made by banners placed at two strategic locations, one at the Bessengue intersection and the other at the exit of Bonabery Bridge. 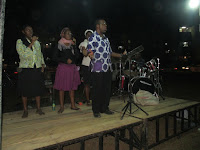 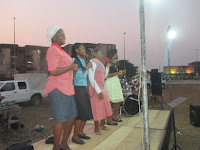 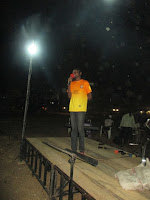 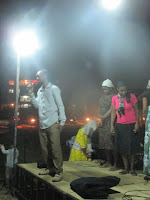 The testimonies were all significant and led the hearts to the rest of the program. One downside is that sometimes they were long and gave details that did not be discussed in public. It is important that Christians be formed to give their testimony briefly and concisely when orally made, so that they remain attractive to the listener. For some often have stories that could be extremely edifying but become boring or may lose interest because of the manner in which they are exposed. After the testimonies, the praise band led a few more songs before preaching. 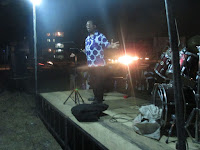 The theme of the sermon was this time, “In a World of Suffering: Jesus the Way, the Truth and the Life is the Solution.” Each day the number of people who gave their lives to Jesus after hearing the preaching increased. The last day a woman came to me and say she was following the sermons from the balcony of his apartment building and she was so moved that she said to herself today she’s got to go down and come closer and ultimately she gave her life to the Lord. May HaShem be glorified! 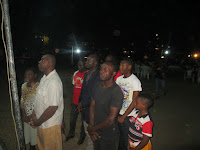 Many people came to Christ during the four days of evangelization and we thank God for allowing us to be involved in His work, labourers into His harvest. His Word says that no one comes to Jesus unless he is drown by The Father. To Him alone honour and glory for eternity. AMEN!