It was held in Panama City, PANAMA, The WEA Consultation (World Evangelical Alliance), a consultation of the leaders of evangelical churches, mission works and missionary organisations, to reflect together on the polycentric mission. This consultation was organised by the Mission Commission of the World Evangelical Alliance in conjunction with COMIBAM, an Ibero-American missionary cooperation organization that includes more than twenty-five Latin-American countries as well as Spain, Portugal and the Latino-Americans in the USA and Canada. This organisation, in the same way as MANI (Movement for African National Initiatives), works to promote inter-missionary collaboration to reach groups of people not yet riched by the Gospel of Salvation. 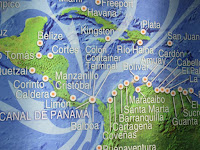 We have gathered in Panama City to hear from one another, to pray and worship, and to meet together in order to understand and respond to the current obstacles and opportunities for global mission with thankful hearts for all that God is doing to further His mission.

If I have to summarise our encounter I would say as introduced one of the speakers: The application to the Global Consultation of the WEA Mission Commission is easy to make. In a polycentric world of mission, the many structures and different kinds of bearers of the Gospel are really important only because of the message they carry and bring to other places.

Going from East to West, from South to North, or just circulating in the same region, the multiple and diverse missional organizations have all the same challenge: to bring hope to a chaotic and needy world with an integral Gospel, and that in a relevant way for people of our days. “From everywhere to everywhere” may be a worn-out expression but it is more reality today than ever before. In the 21st Century, mission has many centres and goes from “all nations to all nations”.

If we look at church and mission history, it is easy to identify the process towards a polycentric reality. It started monocentric in Jerusalem, with both historical and thelogical reasons for that. But the plan was to expand and create new centres of the Christian faith. 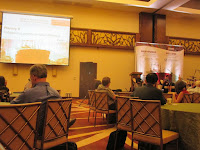 It is encouraging to see the movement of Christian missions throughout the centuries. Some important centres were closed down, even completely destroyed. But new centres have emerged and we can see these different phases of missionary work along the years. It ha travelled from the Midle East to Europe and to the East, then to North America and from the West to the South and to the East. And now back to the North and to the Middle Est. Today we celebrate the Polycentric Reality, the fact that the Church of Christ is the most globalised faith and that most countries have their mission initiatives and movements. A good question is, of course, where ares the dynamic mission movements today? What are the implications of that for us as worldwide Christianity? And what will happen in the next ten years?

For some years we have rejoiced that mission today goes from all nations to all nations. It is not anymore from the West to the Rest.

Polycentrism means today not just that the Church is all over but that the church in all these places is essentially a missional church, particularly if we look at the way churches in the Global South are active in their own neighbourhood and have also now started sending people cros-culturally. And all this emerges from an understanding of a holistic and integral mission based on the whole Gospel.

We took the opportunity during this Consultation to grow in our acquaintance with these realities. We had a great priviledge to listen to each other and to discover the richness of the churches represented in Panama. At the end of our work, the Synthesis Committee drafted the following conclusions uner the heading: 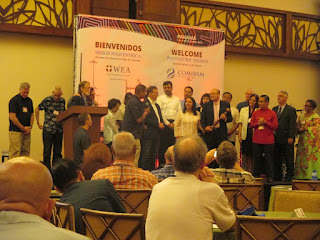 REDACTION TEAM CONCLUSIONS
“Mission” in many voices: Polycentric and Polyphonic

As members of the Mission Commision of the World Evangelical Alliance, we have gathered in Panama City, Panama, 3rd-7th October 2016, to hear from God’s Word and from one another, to pray and worship, and to meet together in order to understand and respond to the current obstacles and opportunities for the Global Mission.

With thankful hearts for all that God is doing to further His Mission, we celebrate:

·         * The warm welcome we have received here in Panama from sisters and brothers in the Latin American Evangelical Community.
·         * With evangelicals in Latin America, the significance of centennial commemoration of the Panama Conference, held here in 1916.
·         * The contribution to our programme of indigenous Christian leaders and our co-hosts, COMIBAM, in this centennial year.
·         * In particular, the unprecedented movement of God’s Spirit and of God’s people, often unpredictable and apparently ‘messy’, across this continent over the last one hundred years.
·         * The ongoing contribution of Latin American missiology to the global evangelical missiology and we welcome the potential for further self-theologising from within this context as a way of enriching our understanding of what God is doing in mission in our time.
·         * The embodiement within the Mission Commission of polycentric connection movement in mission, and a polyphonic missional conversation.
·         * The continuity of themes emergin in this consultation with those that were explored at the meeting of the WEA Misson Commission at Iguassu, Brazil, in 1999.
·         * An emerging self-critical understanding within the evangelical mission movement that demonstrates a renewed hopefulness and which avoids palysis.
In the various sessions of this Commission we have noted:
·         * An ongoing engagement with mission understood as ‘from everywere to everywere’ and welcome the momentum imparted by our discussion of “Polycentric Mission”.
·         * A widely spread sense of insecurity, even fear, among members of our evangelical communities in the face of religious opposition, violence and insecurity.
·         * The deep concern with many young people who are leaving the churches in unprecedented numbers.
·         * That the emergin mission movements in some parts of the world appears to have reached a plateau.
·         * That in many instances, the default mode for missionary activity is still one in which the powerful direct and control mission to the powerless.
·         * A renewed emphasis on missionary self-emtying as a more biblical approach over and against a”wining” mentality.
·         * The global movement of God and the global movement of people at a time in history which some have describe as “the age of migration”.
·         * The limited vision of the evangelical mission movement in adequately understanding and addressing the issues of power and control involved in engaging the indigenious people of the world (including those of North America, Latin America, the Sami of northen Europe, the Roma of Central Europe, aboriginal people of Australia and Maori in New Zealand) and in recognizing the movement of God’s Spirit among them in many places.
·         * The need for further reflection on what it means to sufer with others who are persecuted for their faith as they engage in mission in challenging contexts.

The Word of God through the book of Jonah, has been a mirror for us, reminding us that when the world is crying for help, the church is frequently found sleeping, insensitive to the despair and the need of the people.

God may use the storms of life to wake up His people and re-sensitive them as they realize that disobedience severs relationship with God, the depth of which can only be expressed with the poetry of the Psalms. This mirror that makes us aware of our condition as a disobedient people, also proclaims powerfully to us the love, concern, and compassion of our God who can revive and send us again as His messengers to a world in need. It also calls our attention to the love, patience and forgiving disposition of our God, a love so deep that we can only contemplate it, without always understanding it. In responding to the theme of “Polycentric Mission”, we encourage:

·         - Caution in simply replacing ‘mission from everywhere to everywhere’ with “Polycentric Mission”. It is important to continue struggling with the implications of both, acknowledging our inadequate success with the former an avoiding the rush to move on to the latter in the belief that the new and the novel will rescue the missionary enterprise
·         - Caution in collapsing “Polycentric Mission”into merely organizational, territorial, denominational or ethnic categories without recognising its limitless potential for calling us to ever deeper unity.
·         - Generosity in aknowledging the gift to our evangelical community of connecting with parallel, polyphonic conversations underway in other global gathering of fellow disciples, including the Lausanne Movement, the Conference for World Mission and Evangelism, and other relevant, missionfocused bodies.
·         - Further reflection on what each of the loca and regional voices in the conversation brings uniquely to the global mission conversation.
·         - A recognition that the lived experience of feeling, or of being treated as, either inferior or superior, are consequences of our human fallen nature which the Gospel addresses diretly. Andrew Walls describes those as “The riches of a hundred places learnig from each other”.
·         - A wide recognition that Christianity is both a local and a global faith. There remains the need for the local church to engage its local context in interdependence with polycentric and polyphonic global mission in the service of the greater unity of the church and its united endeavour in mission.

Above all, in light of the theme of this Mission Commission Consultation, we celebrate the potential revealed by attention to the concept of “polycentric mission”. In welcoming the insight of those who have suggested that this could be extended to incorporate closely related concepts, we encourage deeper and ongoing reflection upon the theme. This would include a polycphonic mission conversation, poly-directional mission, and polygenerational mission, cruci-centric or Christo-centric mission, and unity in mission.

Taken together with the notion of polycentric mission and ‘mission from everywhere to everywhere’ these closely-related ideas point to the relativising of all centres of influence and powers in light of the claims of the cross and of Christ. This extends over all competing loyalties, whether ethnic, cultural, National, political, generational, denominational, or organizational, and offers a re-centring of a united polyphonic missional conversation.

Tankful to all that the Lord of the Nations have shown us over these days together,we leave members of this consultation with questions rather than a final summary statement, inviting others to add their voices to an ongoing global conversation.

·         * How are we to remain faithfully and self-critically open to the transforming influence of the Bible upon our mission practice, as it it read in context?
·         * How
can we encourage patterns of missionary spirituality that equip and enable us to the practice of radical love of others so that we can better hear and understand their alternative and diverse voices in a globa polyphonic chorus of worship and witness?

·         * In what ways can we ensure that our exploration of polycentric mission in this consultation continues to inform our understanding of contemporary mission practice and theology?
·         * In what ways might a Trinitarian understanding of mission ensure adequacy of our expressions of the polycentric and polyphonic nature of global mission?