The Lifeline Expedition Mission in Cuba

We visited CUBA from October 6 to 24, 2016, for a very special mission as it was announced and that was. Indeed, usually when we arrive in a country, we organize a prophetic march with chains and yokes to express our compassion with the sufferings of slavery, followed by our request for forgiveness to the local people who are called at the end of the march, to remove chains and yokes symbolically granting their forgiveness as a sign of reconciliation. 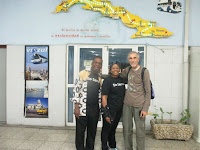 This time, the lifeline Expedition team was reduced to three people representing the three people groups involved in the “Triangular trade”: a slave descendant, an African and a European. From the get go, we knew that our mission will be different first from the preparation and from what the Lord gave us. In addition, the recommendation from our brother Joseph, leader of this ministry, was that we should listen to God and the people on the ground, then to visit the targeted sites if possible and to make our recommandations. That is what we did.

The day after our arrival we met the man who was to be our man of peace, but that we finally met only once. He gave us a summary of the Cuban situation in relation to our mission, and then he advised us to meet the actors who could best help us in this task, in particular the leader of the ICC (the International Church of Cuba) as well as the leaders of the Cuba Council of Churches. These are people whom Joseph also recommended us to meet, but we did not have their phone numbers or physical addresses.

It then turned out that the person of peace we really needed was Pastor Rodolfo Juarez of the ICC. He made himself available to us for all the essential meetings we had and his advice was always very relevant. It was he who fixed appointments with Rev. Dopiko, Chairman of the CCC, Pastor Suarez of the Martin Luther King’s Center, after we missed appointment with him, it was he who helped us organize our trip to Trinidad and Santiago de Cuba and made contact with Bishop Laborde, the leader of the Church in Santiago that received us on site. And when we found ourselves in difficultiy at the end of the mission, our landlady asking us to leave the place two days before the end of our contract with her, it was also he and his wife Flor who helped us to solve this problem quickly and in excellent conditions.

Among all the people we met from a variety of backgrounds and organizations it is unanimously admited that our approach in walking with yokes and chains will not be appropriate neither understood in the context of Cuba and should not be used in this country. They are observing that the issue of slavery do not have the same legacies or impact as in other Caribbean Islands or the USA. Since the Cuban revolution, government officials have put in place policies that Cuban will not be defined by their racial origins or skin colour. These policies contributed greatly to level racial considerations in the country though one can notice some “resistance” from one side or the other (Black people as well as White people), as remarked Bishop Laborde who, among all those we met, was the only one to express this shade.

The Work is accomplished 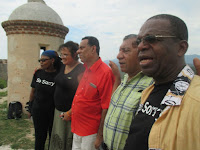 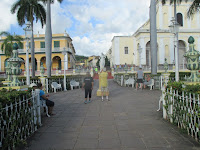 We believe however that the work we were sent to do was accomplished in that land. Though what we did this time was in the same spirit of Lifeline Expedition, it was different than the usual form. We were listening to our hosts in every place we went, we prayer walked in every city we visited, taking authority and blessing the Nation. We started in Trinidad de Cuba where we walked and prayed nightly in the streets of the city for over an hour, then we went to Santiago de Cuba where we had the honour of being joined by all the Team of Bishop Laborde who walked and prayed with us to the Del Morro Fortress where we gave hands and knelt for the final prayer. It was Jacques who received the vision that we should accomplish the work in this Fortress. We ended up in Havana where we had to walk seven times round the great tower of the Masonic temple, which we also did with a young local participant. It was important for us that at each march the local church be present, which represented a spiritual agreement to accomplish the mission within the country. 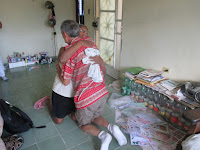 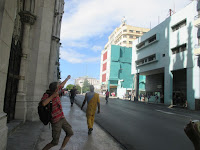 After the Walk in Havana, we met a surpising woman of God versed in Bible meditation and intercession. She too shared with us that we were sent to brake the spiritual yoke of mental salvery that is keeping this people in chains. But she let us know that our assignement would not be done until we reached the city of “Matanza”. It seems there is a museum of slavery spiritually very charged. Before we moved, Jacques was inspired by a ritual of forgiveness for this woman of God of Afro-Cuban origin: he symbolically tied his hands, knelt down and made his request for forgiveness, on behalf of Europeans, to the descendants of African represented by her, shedding warm tears. She then symbolically freed him and granted forgiveness, then they embraced for a long time. Jacques, from that moment, considered that the Work of Lifeline Expedition had been accomplished in that country.

As a result of these visits, listening to our various hostes and taking into account the Work carried out on the ground, we made recommendations as to the follow-up to this mission. We are honoured to have been part of this exploration mission and to have participated in the blessing of the People and the Nation of Cuba. We hope there will be a follow-up to the work that has been started. 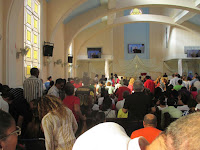 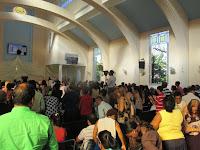