Our Missionary Organisation based in France, The Missionary Actions for Evangelism in Africa – Source of Living Water, organized for the tenth consecutive year in Strasbourg, The Global Day Of Prayer (GDOP) at the playground of the “Jardin des 2Rives”. This encounter was initiated by a South African business man following a vision in which God asked him to rent a stadium to hold a prayer meeting there at Pentecost. Started in South Africa, it spread throughout the Africa continent to engulf the whole world since 2005, when Africa invite the world to pray for the Nations on the Day of Pentecost.

For this tenth anniversary, the organization was relatively difficult. First, the City Council who graciously used to put at our disposal very year for last ten years a podium, awarded this year with condition that we provide a financial contribution our association who has a hard time financing his evangelistic activities could not stand. It is Serge B., a friend and brother in Christ in the Lyon region, who encouraged us by offering us to bring from his region for us, a podium he would himself manufacture. Then we learned by our beloved Brother Pierrot who used to give us a hand to the sound system, that not only he could not be released from his job this year to help us, but also the Christian organisation that lent us his sound since the beginning of this event could not do so this year, they had given out the material they used to put at our disposal and had not yet acquired a new one. And finally a number of friends used to give us a helping hand withdrew, some at the last minute. We struggled to complete the organization to the point that I wondered whether it was worth continuing to organise this event. But glory be to God, there was also the faithful who have encouraged and supported us. The fact that the “Evangelical Protestant Fellowship of the Strasbourg Urban Community (now the Euro-metropole) has widely announced the event in Churches, at fellowship meetings and on its website also greatly encouraged us. We thank its officials. 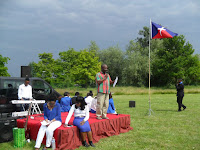 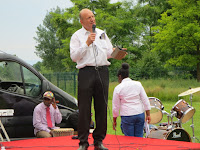 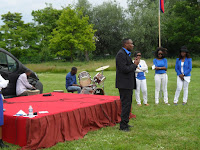 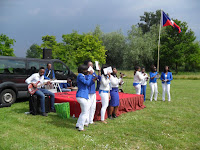 Then we gathered on Sunday, May 24, 2015 from 14:30 to the playground of the “Jardin des 2Rives”. Our partner in praise was again this year the Praise Group of the MIEL Church. It is this church that provided us with the sound through which we could operate this year. The Christian Church “House of Prayer for the Nations” has also contributed this time to a larger participation than previous years. After a time of worship, we began with prayer and the presentation of the event that brought us together in this Pentecost Sunday. Then we prayed for the Authorities, the family according to God that is put to the test in this world today, and for the persecuted Christians, particularly with a special focus on the Middle East. Then we prayed for Europe and Israel, Congo DRC, which has been our particular subject of this year, before raising a prayer for the African Continent. After the prayer for the Nations that united us with all Christians of the world who gathered for this day of prayer, since it is the same for everyone and in all tongues, we prayed for the unity of the Body of Christ in need in this world were the Christians are the most persecuted group. We closed the meeting with a prayer of blessing and the MIEL Praise group accompanied us until the end of the meeting. 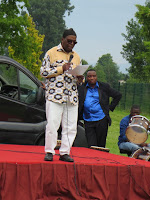 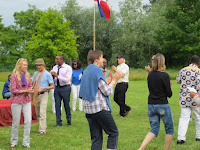 We experienced again this year, intense moments of fellowship and visitation of the Holy Spirit through the prayers we have raised to God. A friend and Brother in Christ told me he was living something special about this meeting and that it was for him one of the best times of the year. May the Lord be Glorified!